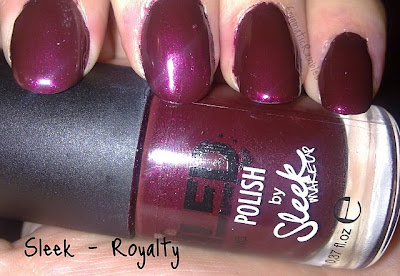 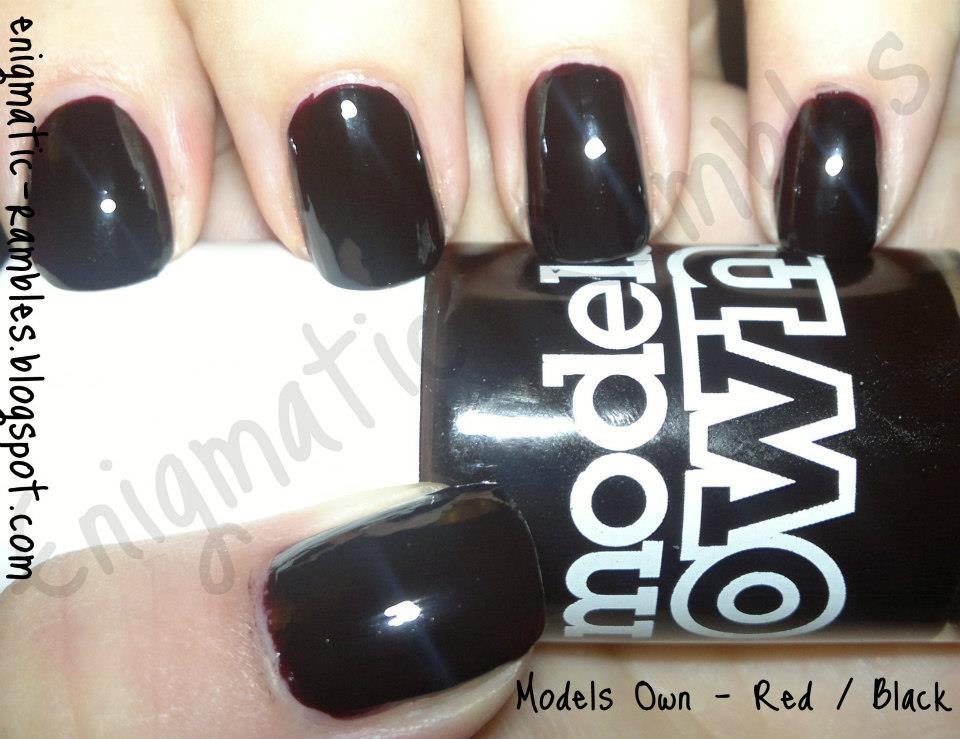 
This was supposed to be a photo of the brush and the bottle size but not sure if it shows up too well;

This is one coat;

And this is two coats;

Left the polish feeling a little bit gritty and so I applied my Sally Hansen Insta-Dri top coat to the top; 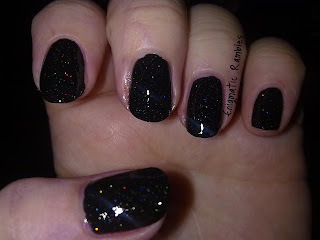 I like the colour, its a very dark navy with coloured glitter. I'm not usually a fan of glitter but I like this.
No comments:

Basically this was a week long challenge whereby I wore a different polish each day which I hadn't worn in a while.

Another attempt at stamping nail art, its really easy but lining them up is what I'm struggling with right now!

Oh and finally my nails are growing again, just the pinky to get going!

This is a really nice polish to apply, take two coats and chips as much as a usual one so nothing to note there. Its lovely vivid, and shiny!

This polish took three coats to be opaque, got it on a three for two deal at Boots

I got this when The Body Shop had a 50% off deal going.

They say ~ With Community Trade hemp seed oil from England and Community Trade beeswax. A family-run co-operative supplies us with the Community Trade hemp for our body care range. It is grown using traditional farming methods passed down through the generations and without the use of pesticides – helping to protect the natural habitat. The crop provides a stable income for the farmers and a rich oil for us.

What do I think? ~ I've been using it for a while. It's really thick, thicker than toothpaste. As it is really thick and intense so best use it at night where you don't mind having oily hands.

The scent has been described as earthy which I guess is true, but it does have a very distinctive hemp smell which isn't bad. It stays on your skin for a little while too. My hands aren't dry even in the winter, I do wash my hands well over 15 times a day so need something to help them be moisturised but for me this is too intense. I don't have dry or cracked hands, but I could see this as being really good for that. I personally wont be buying this again but that's because its targeted at very dry hands rather than 'normal' hands!

Overall ~ I think its a little overpriced but if you do suffer from cracked dry hands then do go for it.

So if you have been reading for any length of time you will realise that I have gone through various stages of storage. Origninally I used some three draws from poundland but they sharp got full!

Now once those got full I decided to make my own little stairs for my polishes. I wanted to actually be able to see what I had to play about with

But ultimatly that got full and was taking up too much room and so I knocked up a little shelf sort of thing myself and now I can see everything, all the colours and it looks so good! My only issue is its getting full!

Perhaps I ought to stop buying polishes ...

Really it doesn't help polish stick any better. 4 days wear? Nope. I haven't noticed my nails being 'quenched' or anything. Yes its an alright base coat but if its priced £6-£8 then its not worth it.
I have found that it helps fight against tip wear. I got this in TJ Hughes, was supposed to be £2.99 but ended up getting three for £1.97 for some reason.
No comments:

Once you have painted on a base coat, paint your nails with the red

Again use the brush to draw a line across the top

Fill in the top black

Dot on some pink dots with the nail art pen

Use the white nail art pen to draw on a little bow, and then stick on a red gem

﻿Seeing as its spring I thought I might try something different, it's supposed to be chocolate muffins with chocolate sprinkles and a cherry on top.

I made another polish shelf as the old one was getting full and taking up too much room, and didn't look good. I had been looking on eBay and did find some but they were so expensive and so simple looking. I know I didn't do too well in my wood work GCSE back in the day but thought I might be able to knock something up.

Used some plasterboard and just covered it with an old black tshirt. Only problem is I should have had another shelf because this one is looking quite full already!