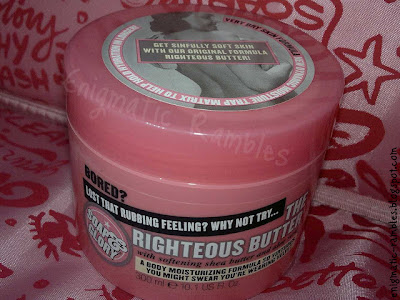 This review is for the 300ml jar, but I imagine the majority of this will apply for both the massive 1 ltr jar and the 50ml travel sized pot. So according to Soap and Glory this product is; "Soap & Glory The Righteous Butter™ Body Butter 300ml is a smooth, creamy, and velvety intense body lotion. With skin softening shea butter and aloe vera to attract moisture, some folks think it's a bit addictive!"

Scent
This does have that amazing Soap and Glory scent, which from what I gather is quite like Marmite. A very scented body butter. I really like it, its feminine and there is something fresh smelling in there which lifts the rose and makes it smell more modern than 1950's rose. The scent lasts relatively well, if you slap it on before bed you will still smell of this, it will have faded though so you aren't overpoweringly scented.

Consistency
As the name suggests this is a very thick moisturiser, I would go as far as saying very similar to the texture of actual butter. Not that I have rubbed that on myself, but I have rubbed it in to flour when baking.

Moisturising Factor
This body butter is very moisturising, it is ideal for very dry skin because of its thicker consistency. It does take a while to sink in to your skin, but not overly so. Not one of those thick butters which never sink in though, where you wake up in the night with a greasy shins. I like to use this all over after a bath, which can be quite dehydrating on the skin. Other than then I would use this on extra dry patches after showering, such as elbows and knees. 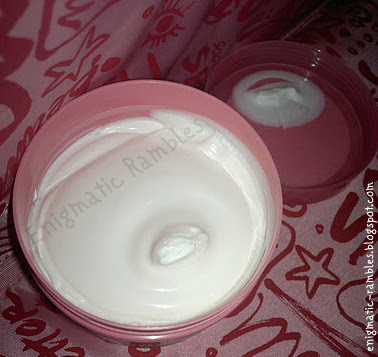 Packaging
Just a jar with a screw off lid, I do have problems getting the lid to screw back on after using this as my hands are quite slippery. As much as a squeezy tube could work it also wouldn't because of the thickness of the butter. So while I have a bit of an issue with the jar, I can't really think of any other way to package it.

Soap and Glory Claims
Sinfully soft skin with our original formula righteous butter!  Yes it does leave your skin soft.
New dynamic moisture trap matrix to help hold hydration in longer!  No idea what that even means, unless a 'dynamic moisturise trap matrix' means shea butter and aloe vera?
A body moisturising formula so virtuous you might swear you're wearing velvet  This claim made me laugh, it does make your skin feel really soft.
Lost that rubbing feeling?  You can use this for massaging, would be nice on your feet I imagine.

- Screw lid can be difficult to get back on
- Price

I wouldn't repurchase but that is more to do with me being a cheap-skate than a reflection of the product.