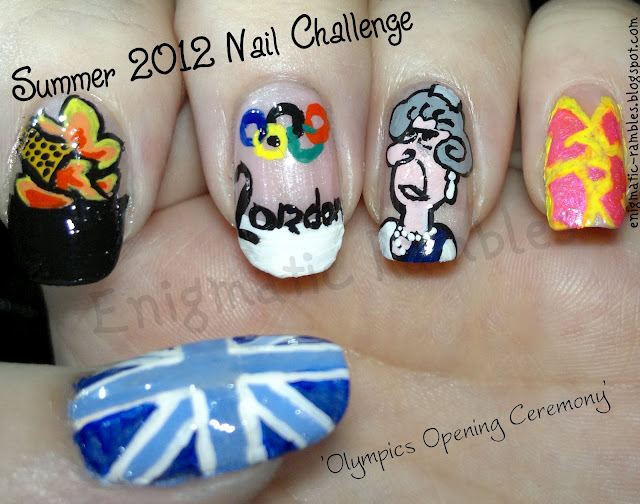 Index Finger - The Torch and Cauldron
"The big finale is the entrance of the Olympic Flame into the Stadium. It is passed through the athletes to the final Torch bearer, who will ceremoniously light the Cauldron, indicating the beginning of the Games. The Flame will continue to burn for the whole of the Games"


Middle Finger - The Official London 2012 Olympics Flag
"Once the Games have been declared open, the Olympic Flag is then carried into the Stadium and hoisted into the air as the respective Anthem is played. The Olympic Charter states that each flag must fly for the entire duration of the Games – placed in a prominent position in the main Stadium"


Ring Finger - The Queen
Receiving the Head of State. "The Head of State of the Host Country is received at the entrance of the Olympic Stadium by the President of the IOC. For the London 2012 Olympic Opening Ceremony, Her Majesty the Queen will be greeted by Jacques Rogge"


Little Finger - Official Olympic Emblem
"The Olympic Emblem is based on the number 2012 – the year of the Games – and includes the Olympic Rings, one of the world’s most recognised brands, and the word ‘London’ – the world's most diverse city"


Thumb - Olympics Union Jack Flag
As far as I can gather the reason for the Official Union Jack Flag to be blue is because it is the same as the outfits which have been designed by Stella McCartney.