"Individual semi permanent lashes that last for up to 4 weeks. Short for inner lashes, medium for centre and long for outer lashes"


As much as I really don't like giving bad reviews as I wouldn't want to single out a company, and tarnish there reputation. However now as with all of my reviews I have to be honest, and for me this product didn't work and is really bad. Other products in there range could be amazing though I just haven't tried them! I have owned these for around eight months and have tried to get them to work for me three times. 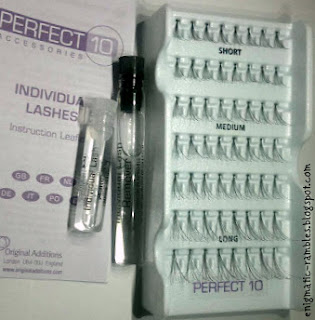 So inside the pack you get three different lengths of lashes, the glue and the glue remover. You will also need some tweezers and some tin foil, although I just used some old paper.

I will be going through both of my experiences with this kit.


I attempted using these lashes with the semi permentant glue and really it was hideous. The glue made my eyes water so bad, and while they didnt sting my eyes felt as if they had air being blown in to them. The glue provided was awful. I couldn't stand attempting to apply more than three lashes. 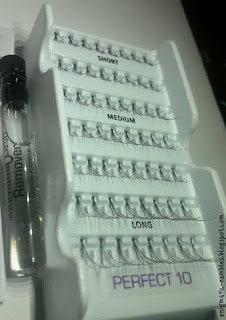 The second attempt was more successful than the first, I managed to get around seven lashes glued in place. Ended up looking really bad though as the lashes weren't all curling upwards they were going all over the place. Couldn't tell until the lash was glued on either when using the tweezers even though I tried to put them on so the curl went the right way.

Don't worry though I will be trying these lashes again, but using Eyelure eyelash glue which isn't semi permanent. I think they could give a really nice lash look if they only worked!