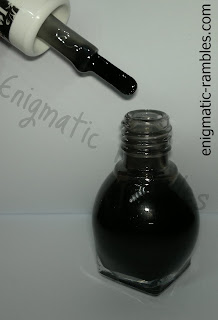 When I first saw this online I just knew I had to have it. 'Goth Me Up' sounds like something I'd like. I've never described myself as 'goth' or any other label, I don't see the point in them. Labels are for jars and tins. When I was once asked if I was a 'goffick' by a guy on the street I replied no, I am just me.

Anyhow on to what we want to see, the nail polish. Firstly a quick skittle set of nails to show the top coat over a range of shades. The concept behind this goth me up top coat is to darken things down and tone down neons and bright polishes. 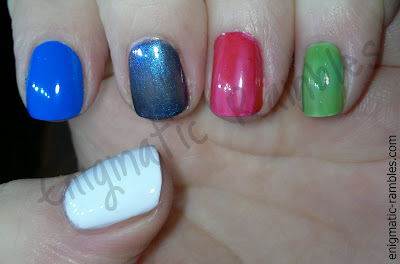 The polish itself is a thin, almost watery black polish. Difficult to work with and particularly streaky, great example of that is on the thumb nail. The index finger with its periwinkle blue polish did actually look toned down and not streaky with the top coat on. I don't think there was any change on the middle finger and while the two neons were toned down a shade or two the streaking is quite obvious. 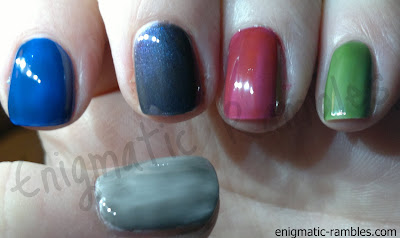 As you can see it doesn't actually have that much of an effect.

Both the pink and the green were a streaky to begin with so I thought I might be being unfair and so this is where the next set of nails came in. 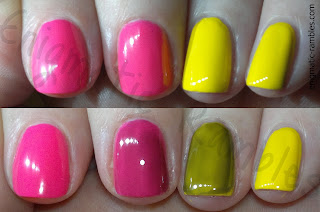 The top nails are just the polish as is, and the bottom picture has the middle and ring finger have had the top coat painted over the top. I think its a case of yes it does dull down the polish but I don't really see the point in it.

Have you tried it? What do you think?