"A light mist that dries quickly so it doesn't drip or run. Gives skin an instant healthy looking glow with a matte finish that hides blemishes. Can be removed with soap and water" - BarryM

I am quite pale, but I do tan very easily. I tend to avoid being in the sun or trying to tan because in the past I have had to have moles removed and I don't want to tempt fade with the skin cancer. I have however used gradual tanners in the past, one by Dove Gradual Self Tanner and Johnson's Facial Tanner Holiday Skin. I have never tried a spray tan in a can before. I like the idea that it does come off in the shower because I always worry about what I would do if a gradual tanner left me looking patchy.

Before using this I exfoliated and followed up with a body moisturiser. I was quite skeptical of this before using, sprayed it over my leg and it looked patchy and very dark. So I went ahead and rubbed the mist in which really helped, it left my skin matte and the colour was even without steaks or patches. 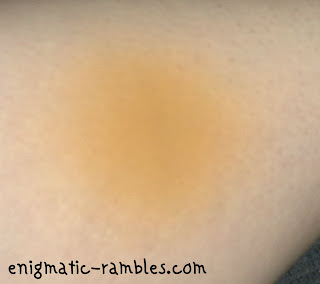 The scent is fresh, it doesn't have that awful digestive scent the gradual tanners I have used in the past. I found using the spray can very easy and even though it left my skin looking a little patchy once it was rubbed in it was a even tan and the colour even came down a shade or two which left it looking much more natural on me.

The colour is quite deep, however it is a colour I have been from sun tanning in the past so whilst it did look odd for me to be so dark once applied over the rest of my body it wasn't an unbelievable shade. I do think though I would go for the original medium shade personally, or if they brought out a light shade that would be  better suited for me.


What I would say is do moisturise before applying, and be careful around elbows, ankles and knees as if you do have dry patches it will cling to those.

I liked how the tan left my skin matte and the colour helped to even out my usually blotchy skin tone. It also covered my veins which show through on my naturally pale skin, and even a little bit of a shaving rash I seem to have acquired. Once it was dried it wouldn't rub off and to remove it I did have to use a shower puff and shower gel. I think this would be great for a night out, an event or even during the day if you wanted to get your legs out without wearing tights.

It has sparked an interest in spray tans for me and it is something I would use during the summer on my legs because I tend to glow being so pale when the sun is out.