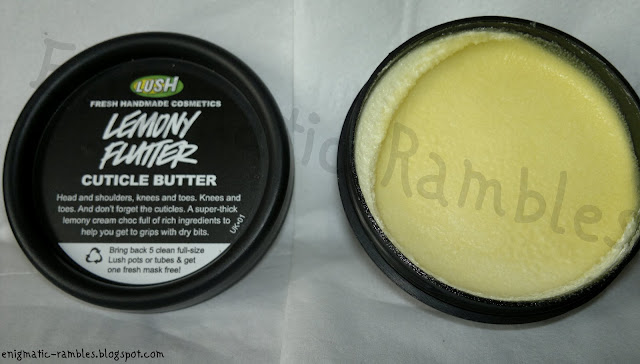 "Perfect for softening our hardest bits: knees, elbows, heels, brittle nails and cuticles finally get the attention they deserve. Lemony Flutter revives a traditional method of cream-making that even the Romans would recognise. A little goes a long way, and within just a few applications, those neglected areas will be rejuvenated and smelling delicious, just like lemon curd" - Lush

This cuticle butter is thick and does leave a greasy residue, however that said it is really good. It moisturises and softens cuticles, which is especially important because who wants nice nails but rough photo frames? Because it leaves my fingers coated I use it right before bed. More of a heavy duty cuticle moisturiser rather than a during the day quick light moisturiser.

It is a soft solid, very similar in texture to butter. I scrape a little out using the top side of my nail then apply it to each cuticle. As soon as you begin to massage it in the butter melts quickly with body heat. You don't need much of this so the pot does last for a long time.

The scent of this is delicious, very much like a lemon meringue smell. I don't like eating lemon flavoured things and generally don't like anything which smells of lemons. But there is a sweetness to this rather than a straight up lemon scent which makes it easily tolerable.

Something else I would say is don't get this in your eyes, it does sting!