Next up is my primer draw, the third draw in my second unit.

I have put my Urban Decay Primer Potion in to a small jar because I had the old packaging and I wanted to use up all of the product rather than binning it because I couldn't get to all of the product. Also my primer of choice isn't in rotation at the moment but I do still really like the ELF Mineral Primer. 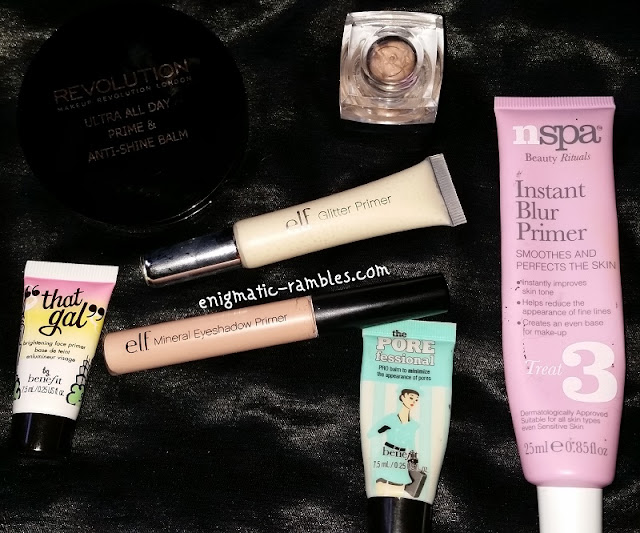 Makeup Revolution - Ultra All Day Prime and Anti Shine Balm
This is a bit of a strange one, it is a solid primer which comes with a sponge so you end up smearing it around your face. It is also suggested you use this on top of make up to remove shine but it just smears the make up underneth. I like to use it as a primer by scraping a bit of product from the pan and then applying it to my face in the way you would a normal primer. I don't reach for this often as its a bit of a faff, and once it is used up I doubt I would repurchase.

Urban Decay Primer Potion
I am pretty sure this is the reason I got in to make up in such a big way, my eye lids are quite prone to creasing eyeshadow. I don't know if it is because I wear glasses most of the time or if I have oily lids or some combination. Either way this makes it possible for me to wear eyeshadow for more than 2 hours without it creasing. While I really like this and it works, I think now there are equally good products for a lower price on the market, but this is the original and I really like it.

ELF Glitter Primer
To be fair I haven't used this much, I just don't wear glitter often. It is very sticky which helps the glitter to stick. It does also mean that it is hard to get the eyeshadow blended. I'd not buy this again because I don't really wear glitter eyeshadows.

ELF Mineral Eyeshadow Primer
I've gone through a couple of these and it does perform almost as well as the Urban Decay. I would repurchase this again once it was used up but ELF isn't very accessible in the UK.

Benefit That Gal Primer
This leaves my skin glowing both prior and after foundation application. I think it would be great for those who like a glow, I prefer a matt look myself so wouldn't purchase a full sized tube.

Benefit Pore-Fessional Primer
This product gets a lot of hype, and it does work as a basic silicone primer. For me though I am too pale for it as it is tinted a beige colour, which sits in my pores and makes me look like I have speckles of dirt over my face. If it wasn't tinted it would work as well as my holy grail ELF Mineral Primer. Not one I would buy a full tube of.

NSPA Instant Blur Primer
As I said earlier ELF isn't very accessible in the UK any more as such I am on the hunt for a low cost primer replacement. This primer is a good price (2 NSPA items for £8) there is quite a lot of air in the tube but it does have 25ml of product in it. It does need snaking up before using but other than that it is really good. It is light on the skin, smoothing and helps foundation last all day. I would say the texture is similar to the pore-fessional but without the tinted colour.