Having spent the past two months working my way through all of the new polishes I got over the festive season I have only finished one nail polish. 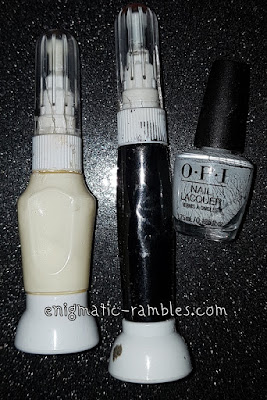 White and Black Nail Art Pens - I found these useful when I was just beginning to get in to nail art but now I have dotting tools and a striping brush so no real need for either of these so won't be replacing them [Review: WAH / Models Own].
OPI - Alpine Snow - I have many white polishes and don't really rate this one, it takes a lot of coats to build up, so won't repurchase. Essence - All About Matt! Powder - This setting powder is white but it is more transparent. I like how it doesn't add any colour to the skin and it doesn't turn me orange, which quite a lot of powders do even when they claim to be transparent. I have already repurchased this.
Rimmel Stay Matte Foundation - I don't remember when I purchased this and so that is why I am throwing it out as it is past its best. I enjoyed using it as a tinted moisturiser kind of foundation. I won't repurchase as I'm using L'Oreal Nude Magique Eau De Teint.
ELF Eye Pencils Black and Coffee - I never really got on with these, they were quite dry in texture and that on the eye area isn't good. Not one I'd repurchase. 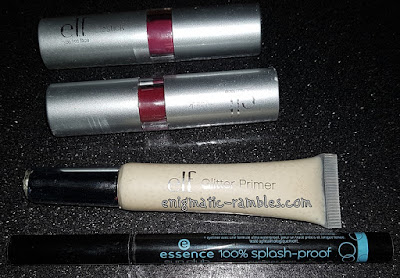 ELF Moisturising Lipstick - Posh and Gypsy - Both of these are past their best. I just never found myself reaching for these, they are moisturising but I find them not very long lasting. A very typical lipstick formulation [review].
ELF - Glitter Primer - I have never used this, I have had it for many years now and I have no idea why I bought it because I do not like glitter!
Essence 100% Splash Proof Eyeliner - The nib on this eyeliner is quite long and thin which means I could get a nice wing. I would repurchase but don't think it is around anymore. 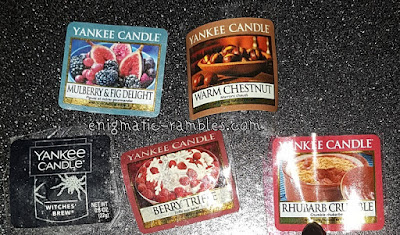 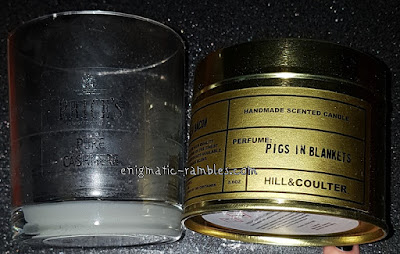 Prices Candle - Pure Cashmire - This had an okay scent throw, was a clean linen type of a scent. I'm not keen on that kind of a scent so not one for buying again.
Hill and Coulter Candle - Pigs in Blankets - As someone who doesn't eat meat this was an odd one. It did smell of smoked meat. The scent throw was mostly a wood burning kind a one rather than a meat one. Not something I liked!

HEM Chandan - Incense Sticks - Very strong and very floral, slightly soapy. I like an incense stick which burns for a longer time and has a strong scent to it, so that it fragrances the whole house, and while I don't live in a mansion this does do that. I don't particularly like the scent but I would try others from the brand.