No nail polishes used up this past month but there were a lot of other beauty bits finished.

ELF Jumbo Lip Gloss Stick - Movie Star - I never reach for this, it is a sheer gloss type product but my hair always sticks to it so won't repurchase this [review and swatch].
ELF Luscious Liquid Lipstick - Maple Sugar - I've never even used this one, I have used the shade before though so this must have been a backup. It is a brown colour in the tube and looks as if it has golden shimmer in it. Again not a formula I like any more [review and swatch].
ELF Luscious Liquid Lipstick - Brownie Points - This one is very similar to Maple Sugar, I have had this for too long now and it is past its best before date. 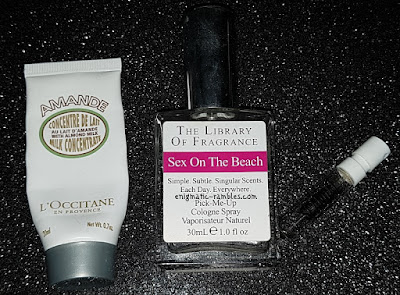 L'Occitane Amande Milk Concentrate - This was a thin body lotion, I really liked the almond scent to it and it didn't leave a tacky layer on my skin either. I would use this again.
The Library Of Fragrance - Sex On The Beach - In theory this would be nice, it does smell quite fruity but at the same time it makes you smell like you have been drinking alcohol which isn't something I like to be smelling of! I would have tried other fragrances from the brand as they have some interesting scents but they no longer sell in the UK.
Jean Paul Gaultier - Scandal - Not sure where I got this sample from, was a nice enough scent but not one I would go out and purchase.

Lush Metamorphosis Bath Bomb - Peppery and masculine, not one I would repurchase [review].
Lush Christmas Sweater Bath Bomb - Quite festive, don't think I would purchase it again [review]. 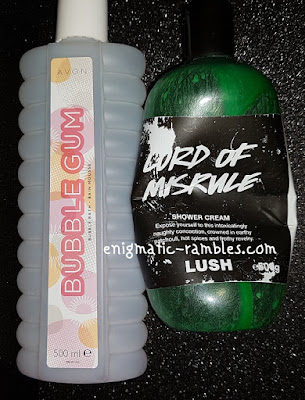 Avon Bubble Gum Bubble Bath - I didn't think this was a strong scent in the water. It did however make a lot of bubbles.
Lush - Lord of Misrule Shower Cream - This is my ideal shower gel, it is very pigmented though and it does turn you green but it does wash off. The scent is identical to the bath bomb, musky and patchouli and a little goes a long way. My only complaint is how expensive it is, otherwise I would repurchase it. 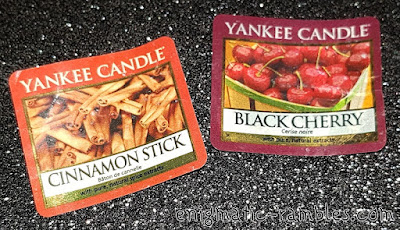