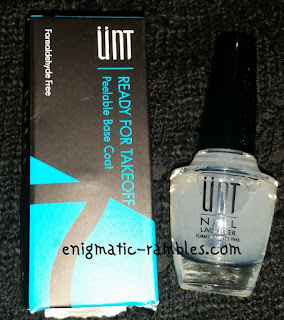 I don't know about you but glitter is the bane of my life, well when it comes to nail polish. Yes you can use the acetone tinfoil method but that is a bit of an effort. I have dabbled in to using PVA glue / Elmer's glue as a base and while that does work is isn't an ideal base coat, it takes a very long time to dry and leaves a lumpy finish.

I finally decided to bite the bullet and spend some birthday money on an actual peel off base coat, I opted for this UNT version after watching a Nailogical video comparing various ones.

The bottle itself has 15ml of product and is waterbased.

It applies very thinly and dries quickly, which made the fact that it works surprising.

The peel off base coat really did work, I found it applied an dries quickly and I was sceptical of it working however it peeled off the glitter really quickly, easily and mostly in one piece.

Overall I really liked this peel off base, it is non damaging and doesn't peel off too easily but it does when you want it to, using an orange stick.

I think the best thing about this is that it has given me to chance to use over 100 glitter nail polishes I already had in my collection. Yes I wore them before but reluctantly and rarely. Now I can wear any of them for even one day. Before if I wore one I had to think whether I wanted to wear it for a week or so because of the effort in removing.