During August I didn't use too many products up; 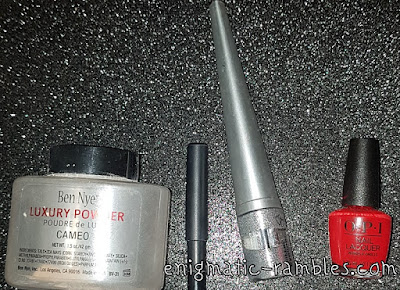 Ben Nye Luxury Powder - Cameo - Before using this powder I didn't know what the meaning on 'finely milled' was. This however is finely milled, it is a beautiful powder which set my foundation. The powder was a good colour match for me, I might repurchase this but it is quite expensive.
Makeup Revlolution Eyeliner - Really liked this eyeliner, long lasting in the waterline, smudge-able etc. I have already repurchased this.
Glitter Eyeliner - This has dried up, which I'm not sad about, I only use it once to twice a year! Don't think I would repurchase this because I never reached for it.
OPI - My Wishlist Is You - This is a bright red which was nice, I have so many reds similar to use up so won't repurchase [swatch]. 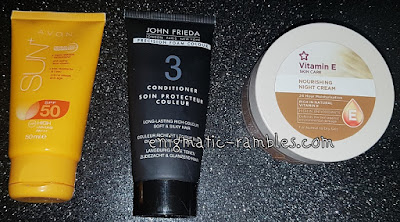 Avon Sun Cream SPF50 - Didn't like this, it left my skin with a white cast and very sticky. It also didn't work with makeup, it balled up underneath. I won't repurchase this.
John Frieda - Hair Dye - I didn't have the box to show but I used the foam dye in black. The dye was a foam which is very different to anything I had used for a long time. It went a long way which was a concern as it didn't look like much liquid. Think the dye itself was a natural off black rather than a stark black. I would repurchase this again depending on how long lasting the dye lasts.
Superdrug Vitamin E Night Cream - I like this but it isn't heavy duty enough for my skin on a night now, this worked as a day moisturiser though. I might repurchase this. 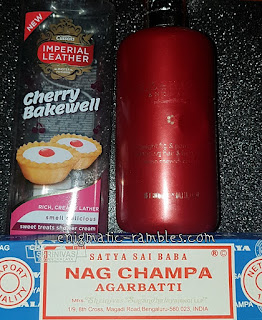 Imperial Leather Cherry Bakewell Shower Gel - I loved the smell of this, the scent didn't really linger on my skin but in the shower it smelled scrumptious. I'd definitely repurchase this.
Baylis and Harding Black Raspberry and Fig - This was okay, the bottle was a screw top which isn't the best for in the shower. I prefer a squeezing one or a pump. Not a repurchase.
Nag Champa Incense - I really like this, very much a 'alternative shop' kind of scent. Strong and burns slowly.