I seem to have a lot of empties this month, using up 27 things!

After going through my nail polishes I realised I had a lot of dried up glitter polishes; 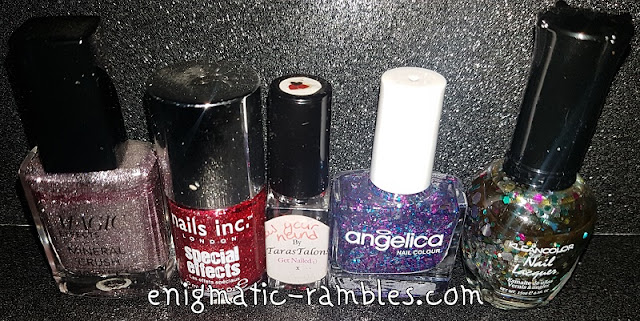 Avon Magic Crush - Nothing wrong with this polish, it is a textured finish one and I really am not a fan of textured polishes [swatch].
Nails Inc Marylebone Lane - The glitter in this has bled out and is no longer red glitter, turned in to silver in red base polish [swatch].
TarasTalons Show Me Your Hand -  This has completely dried out now, shame as it had some unique glitter shapes in it [swatch].
Angelica Bobby Dazzler - I think this one was from Primark a long time ago, it is very similar to OPI Polka.com [swatch].
Kleancolor Afternoon Picnic - I've had this polish since 2011 and now it is dried up it is time for it to leave my collection, it was a chunky multi coloured glitter in a grey base polish [swatch]. 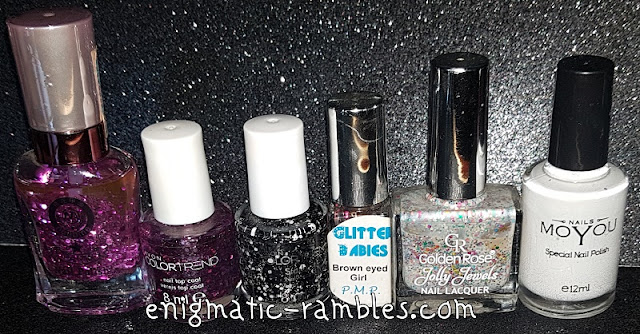 Need Me N346 Purple Hex Top Coat - A polish I have had since 2014, while it hasn't dried up it has separated and the glitter has started to bleed in to the clear base [swatch].
Avon ColorTrend Fuchsia Dazzle - The colour of this had started to change, from more purple based to a pink based glitter [swatch].
Avon ColorTrend Starburst Black - This has mostly been used up now, there was about a fifth left which had dried up [swatch].
Pocket Money Polishes Glitter Babies Brown Eyed Girl - This glitter was a perfect autumn polish, with all the autumnal colours in it, but it dried up beyond repair [swatch].
Golden Rose Jolly Jewels 115 - I'm on the fence about this one, whether it is so ugly its wearable or not. Six years in the base has begun to separate which turned my hand to binning it [swatch].
MoYou Special Nail Polish White - This is a really good stamping nail polish, it has now ran out and I have a back up and would purchase again [swatch]. 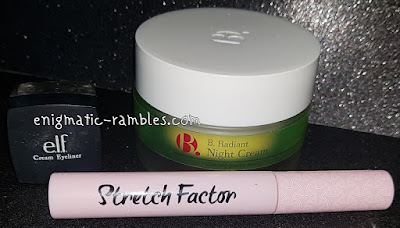 ELF Cream Eyeliner Gun Grey - Dried up, I did enjoy using this while it was good. Don't think I would bother repurchasing a cream liner, at the moment I prefer a pen eyeliner [review].
B. Radiant Night Cream - I like this, the right amount of moisturising for a night cream. I have already repurchased this.
Look Beauty Stretch Factor Mascara - Who knows what happened to Look Beauty? I had a couple of bits from them but this mascara was waterproof and I was hanging on to it, but it is now dried out. 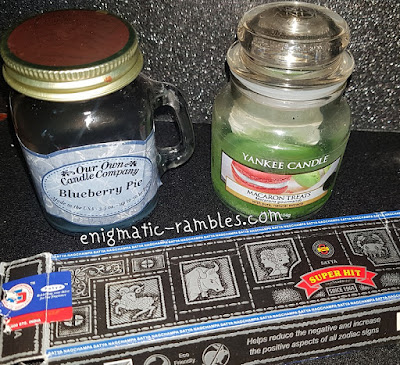 Our Own Candle Company Blueberry Pie - In the jar this smelt amazing, true to the name. However even though over time I burned through the entire jar I didn't smell anything from it which was disappointing.
Yankee Candle Macron Treats - Another candle that smelt amazing in the jar but nothing when burning it. Wouldn't bother with a small jar again.
Super Hit Incense - This is a very marmite type scent, some will hate it while others love it. I quite like it, it is nostalgic of the 90's to me. I'm not sure I would buy it again as I prefer Nag Champa.

Yankee Candle Black Cherry Wax Melt - This is one of those tarts I buy time and time again, its a deep cherry scent which has a good scent throw as well as being long lasting.
Black Candles Online Pumpkin Crunch Cake - Smelled delicious, made me want cake!
Mugworts Witches Brew - I thought this might smell like Yankee Candles Witches Brew but unfortunately it did not. Very much straight up patchouli which is a bit too floral for me. 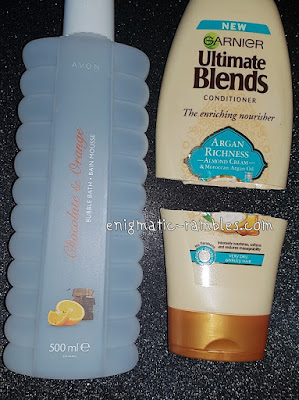 Avon Chocolate Orange Bubble Bath - Smelled like cheap chocolate orange, made bubbles in the bath and actually did scent the bathroom. However not something I would repurchase.
Garnier Ultimate Blends Conditioner Argan Richness - I did also have the shampoo from this range but it didn't agree with my scalp. The conditioner however was really nice, thick and smelled of argan oil and the scent lingered in my hair as well as leaving my hair soft and smooth. 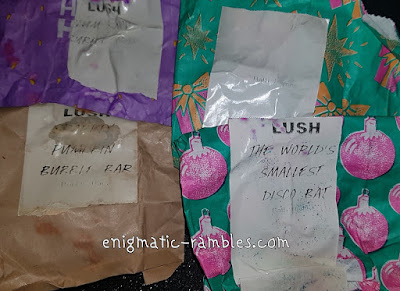 Lush Plum Snow Bubble Bar - This was very crumbly and so had to use it all in one bath. It did however make lots of bubbles, the water turn pink and left me feeling moisturised.
Sex Bomb Bath Bomb - Jasmine scented but not too floral, more musky. Would repurchase [review].
Sparkly Pumpkin Bubble Bar - I'm not a fan of glitter, this did however make plenty of bubbles.
The World's Smallest Disco Bath - I wouldn't want to get this one again, it did make the water dark grey and sparkly which was nice but I had to really scrub the bath afterwards, and it also left glitter everywhere.