As expected I managed to work through three hand creams during the month;

L'Occitane Cherry Blossom + Peony Hand Cream | I like the formula of these, just not a fan of the over powering florals.
Soap and Glory Hand Food | A thicker hand cream, the scent is their traditional 'pink' scent. I like the hand cream and the scent, it does moisturise my hands which at the moment and all of the hand washing is needed. Definitely will repurchase this once I have run out of my backups.
Top Coat | I'm not sure of the brand of this but I much prefer quick drying, thicker top coats which is why it took me so long to use this up.
Essie Beyond Cozy | I went to use this and it had all but dried up, it was a opaque in one coat kind of a glitter. Didn't like it enough to repurchase however [swatch]. 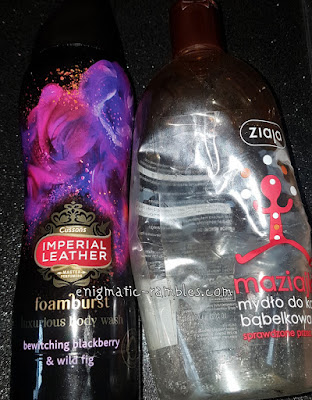 Imperial Leather Foamburst Bewitching Blackberry Shower Gel | These shaving gel type shower gels are a bit of a gimmick and not one I would buy for myself. I did like the scent though and it is duel purpose which is good.
Ziaja Maziajki Cola Shower Gel | The scent of this was very similar to cola bottles. I don't think I would repurchase it as the scent isn't my favourite. 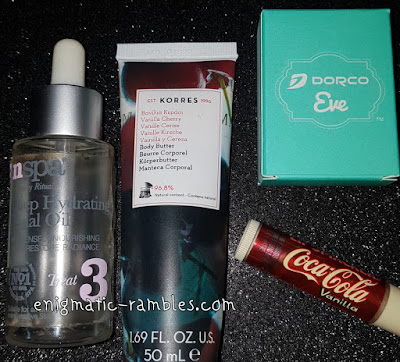 nSpa Hydrating Oil | This was okay, I used it after my usual moisturiser. I don't think I would repurchase because I have better alternatives from The Ordinary now.
Korres Body Butter Vanilla Cherry | This was the nicest of the scents I had tried, the formula was okay but I didn't like it enough to repurchase.
Dorco Eve | These blades are good, each head has six blades on with a bendy section in between. Makes it less likely to nick myself. Would repurchase, if I didn't already have many.
Lip Smacker Vanilla Coca Cola | I like the formula on the lip smackers they do what they are supposed to do. I would repurchase lip smackers again, however I have quite a lot left to use up before buying any more!