However raising awareness is never a bad thing and it also fits in nicely with the Llama ABC Nail Challenge. 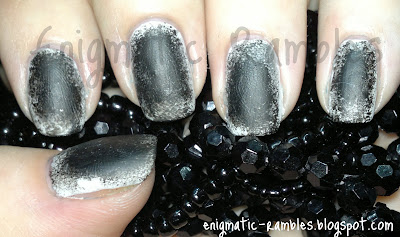 The nails which I have done are supposed to represent the darkness of depression, black, dark, messy, imperfect. Foggy, unclear thinking. The matte finish because there is nothing shiny to be found. Imprinted with a fingerprint as it can be hard to know who you are under all the black fog.

"At least one person in every six  becomes depressed in the course of their lives. One in 20 is clinically depressed. Figures suggest that it is women more than men who become depressed, but men may find it harder to admit to or talk about their experience. All age groups can be affected, and it’s important to take symptoms seriously and not to dismiss them as an inevitable part of growing up or growing old. By recognising and treating the symptoms and getting help, it’s possible to overcome depression, and prevent it coming back"
- MIND